(Hey! I managed to post this even later than last year's! What an achievement.) 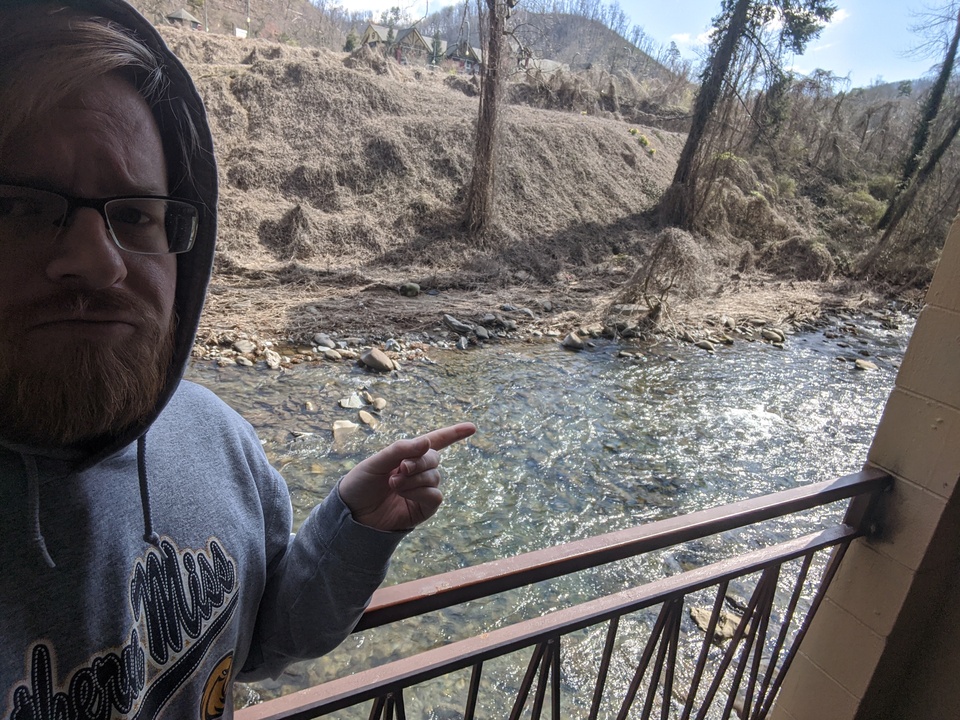 ✈️ This post begins with the one (1) flown trip in 2020. In the midst of learning about this "novel coronavirus", I needed a break from work. So I took a plane to TYS then drove to Gatlinburg, Tennessee to live in a cabin near a river for a weekend. There's a lot I could speak about this trip. Whether it's being the last person on the plane through an absolutely amazing experience at SFB to needing to drive through gated backroads (the gates were for flooding areas) to seeing a small cropping of flowers on the side of the river, I had an... exciting time, and I can't wait to travel by air again. Maybe 2022 we'll be back to normalish? 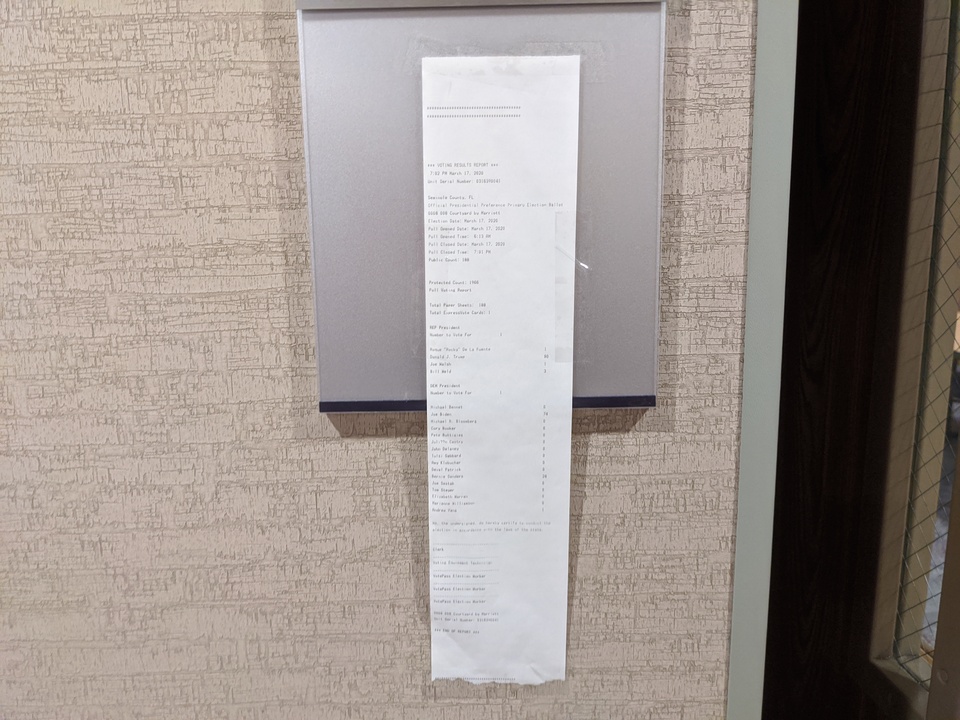 ‎☑️ After registering for it back in 2014, I was finally asked to be a poll worker in Florida this year. My job title was Voter Equipment Technician, which meant that I was in charge of the magic box that you dropped your ballot into. This is a picture I took of the official, public, paper vote count of the results of the Seminole County precinct that I worked, the same precinct that I just happen to vote in. I worked the Florida elections in March, August, and November.

Also, the 2020 elections were open, accurate, and free. And how anyone could claim that election workers across the country, who worked through a global, deadly pandemic to make sure that everyone could vote in the manner they chose, tried to make it otherwise, is beyond me. It's a laughable notion. 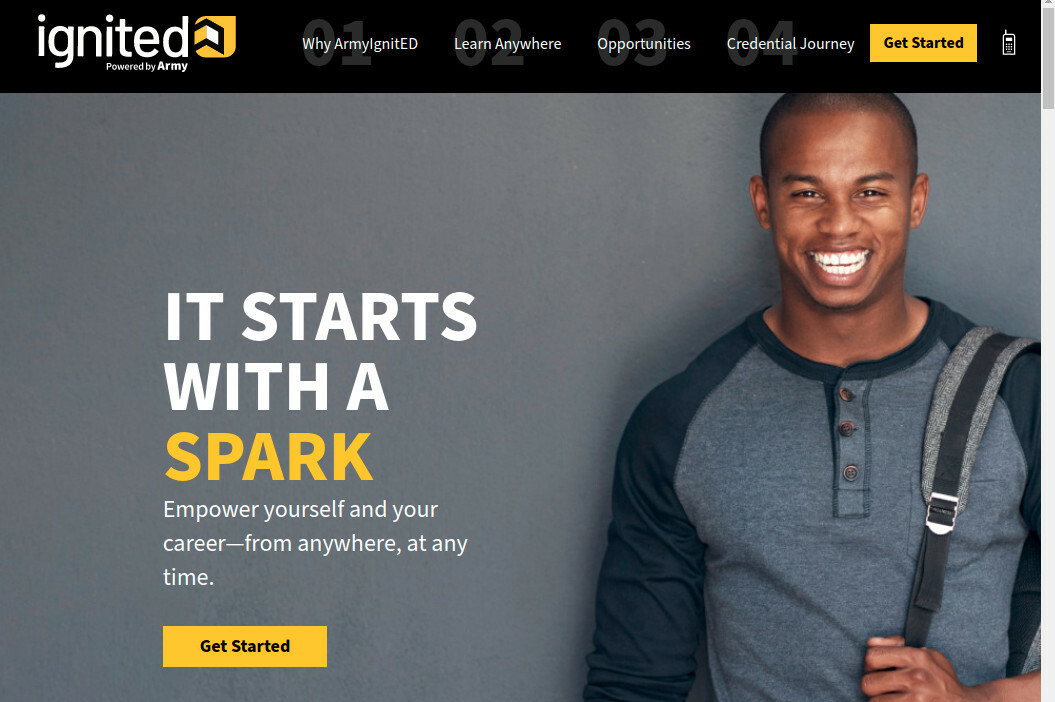 🚀 Also in March, the software product I'd been working on for almost a year finally launched. It's literally the first bit of code I have ever professionally written that has seen a go-live. This is a screenshot of the landing page. We'll be launching 2.0 in March. 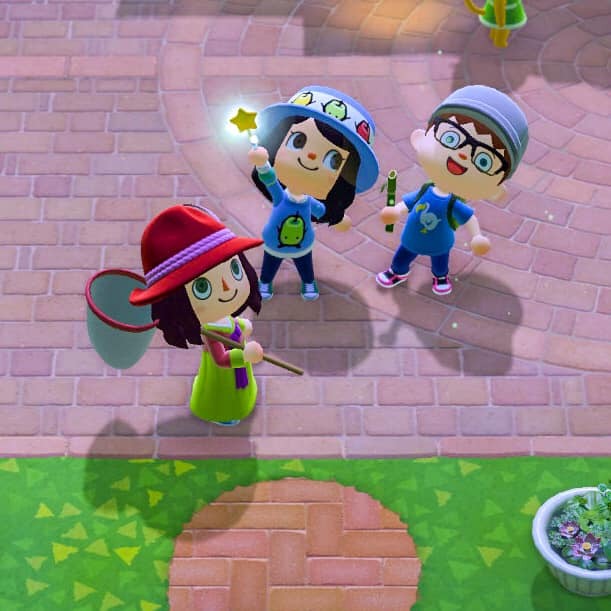 🎮 Animal Crossing came out this year, and you know The Dream Team played a bit of it together. We've been physically distanced since 2009; you think a little pandemic is gonna affect us???

It is. Please let us visit each other again. Please, I'm begging you. Let u- 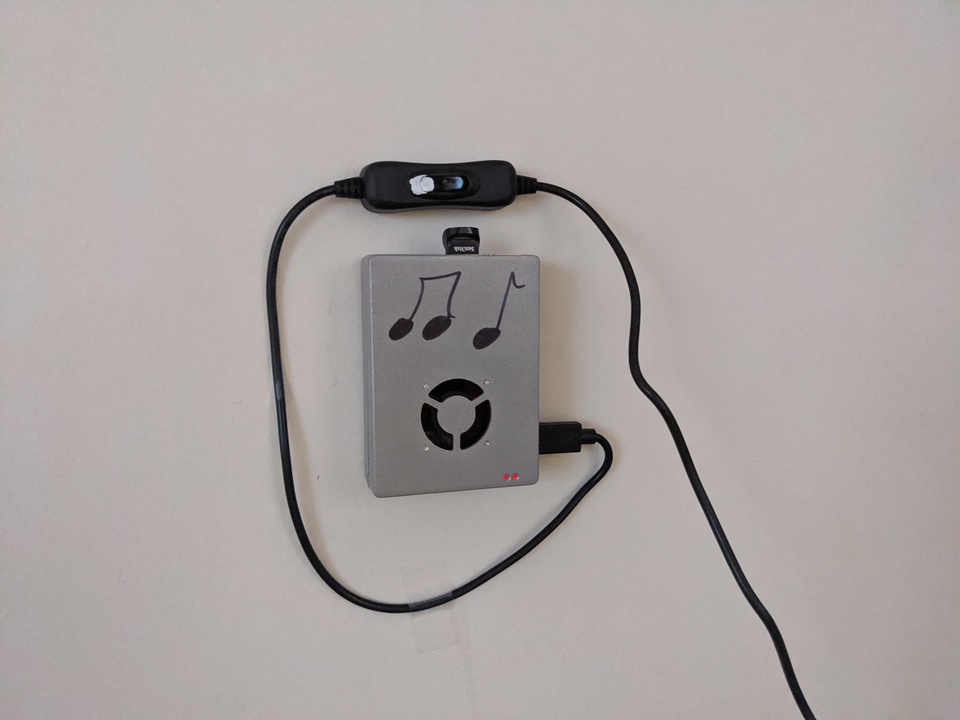 🎼 My preferred music service since 2011 was shut down. Google decided to shutter Play Music, even though I and multitudes of others have enjoyed every minute of it since launch. But with GPM shutting down and "transitioning" to YouTube Music (a lackluster comparison, imo), I instead switched to a self-hosted music service called Airsonic. It doesn't have the most features or whatever, but it does serve up my own music on my own devices on my own network. So I'll never need to switch again. Pictured is my Raspberry Pi 4 that's running Airsonic. 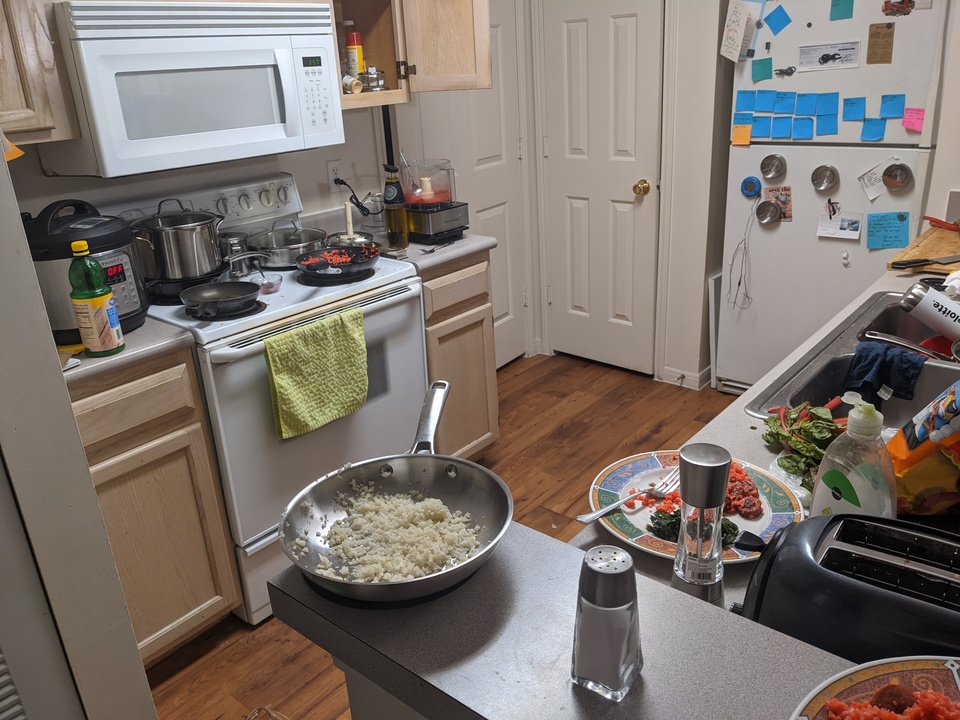 ⏲️ Whitney, Samra, and I had a Chopped-style competition to see who could make the best meal from random ingredients. (Your own son got cauliflower rice, Flamin' Hot Cheetos, Andouille sausage, and rainbow chard.) I don't mean to brag, but on taste, color, and presentation, we all tied! Pictured is my kitchen aftermath. 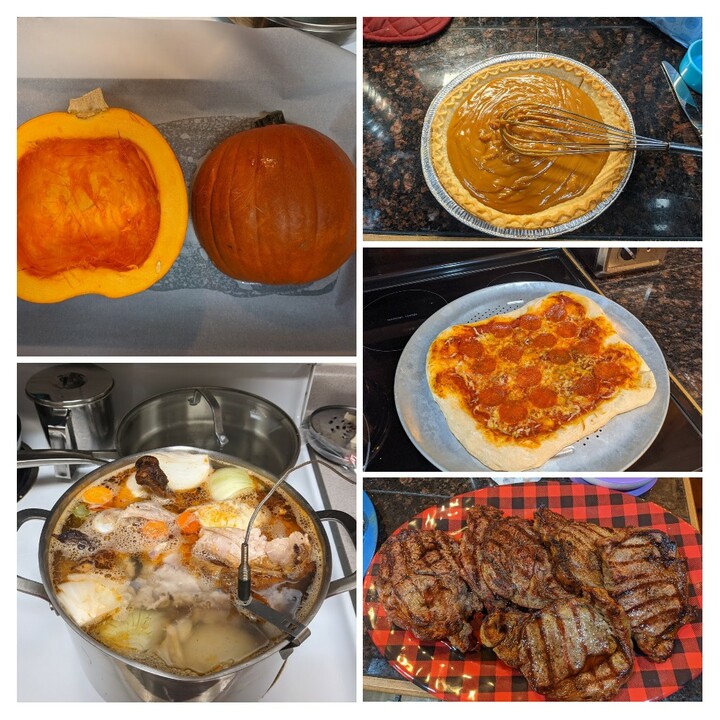 🧑‍🍳 Last is a collage of all the foods I got to cook over Thanksgiving and Christmas. Starting with pumpkin pie, then turkey stock (delicious), homemade pizza, and finishing with grilled steaks. Not much to add here except to highlight that I feel I'm becoming more comfortable in the kitchen and in kitchen-adjacent areas.

(Apparently my goal is to post this later and later each year because it's midway through January and I'm only now making this.) 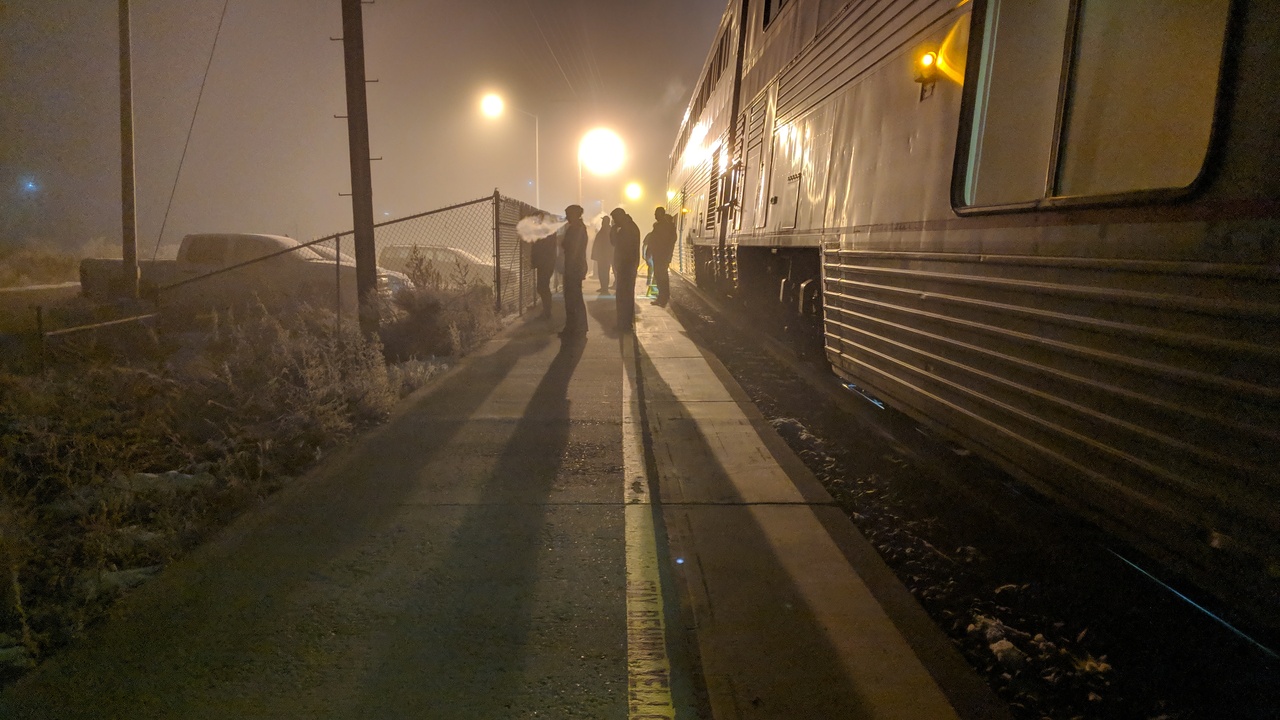 🚆 While I've ridden Amtrak before (mainly to visit NYC in 2017), the 2019 Birthday Trip was traveling from San Francisco to Chicago. Here is a stop in Elko, NV, at 9p; temperature: 17°F. The California Zephyr is a treasure, and you should ride it. 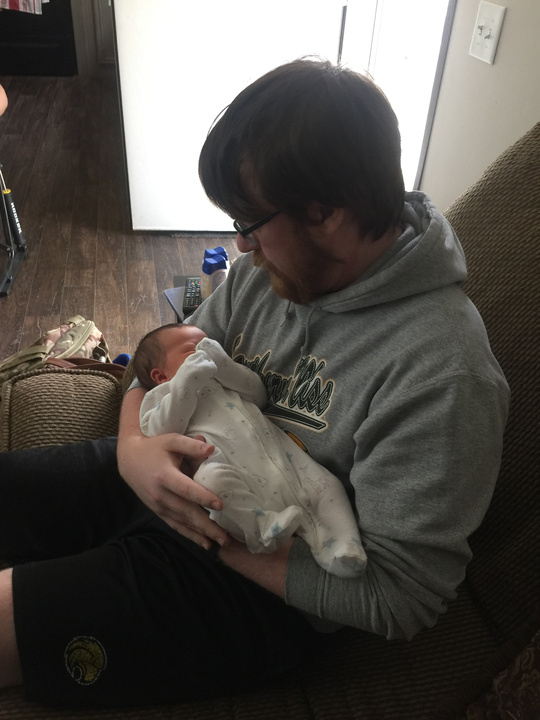 ‎👶 Hello, Clara Mae. My niece was born this year, and in this photo she's in the "I'm a warm, cute, quiet potato" stage. As the year progresses, you'll see that change. 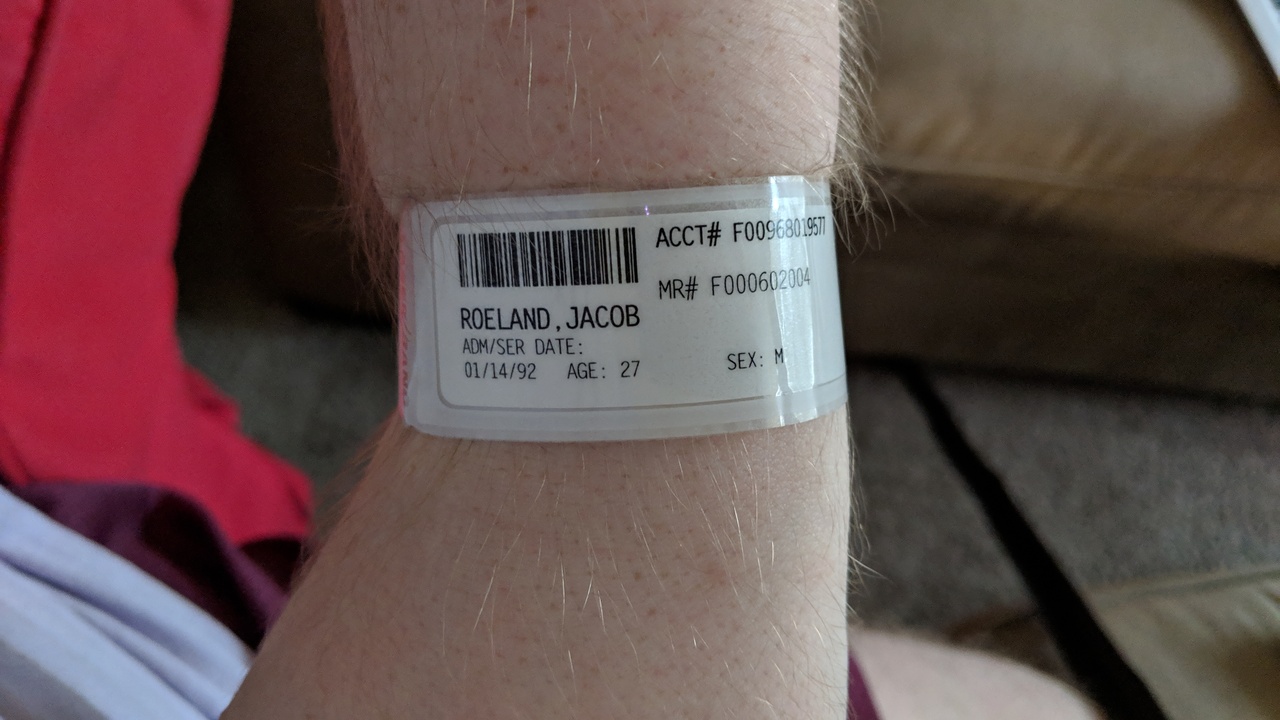 🏥 In April, I experienced dull, aching, immobilizing pain in my back which left me unable and unwilling to move. At all. One quick ER visit later, and I'm given pain pills and muscle relaxers. I've got a messed up spine and will probably have dull pain for quite a while yet. It is what it is. 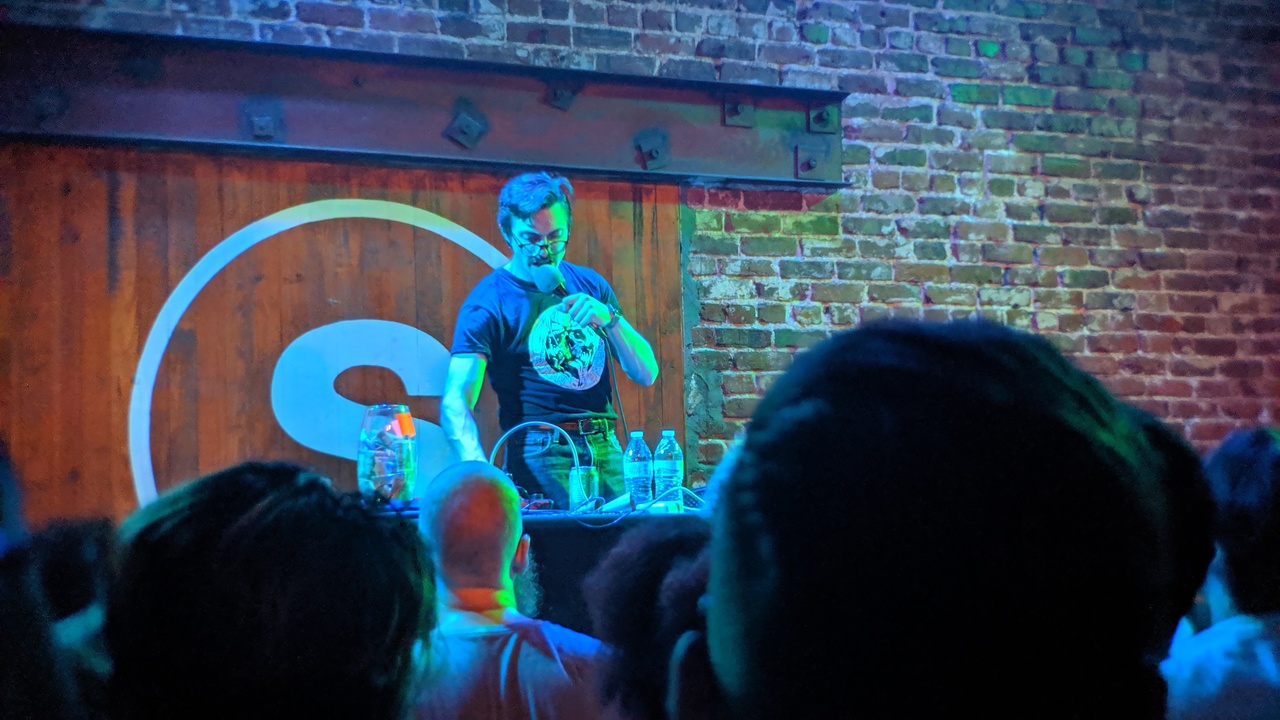 🎛️ How do you describe @marcrebillet? Maybe "improv musician that makes cocaine feel like a depressant"? He came to Orlando, a friend and I went, and it was everything I hoped it would be. "Concert" #1 of the year. 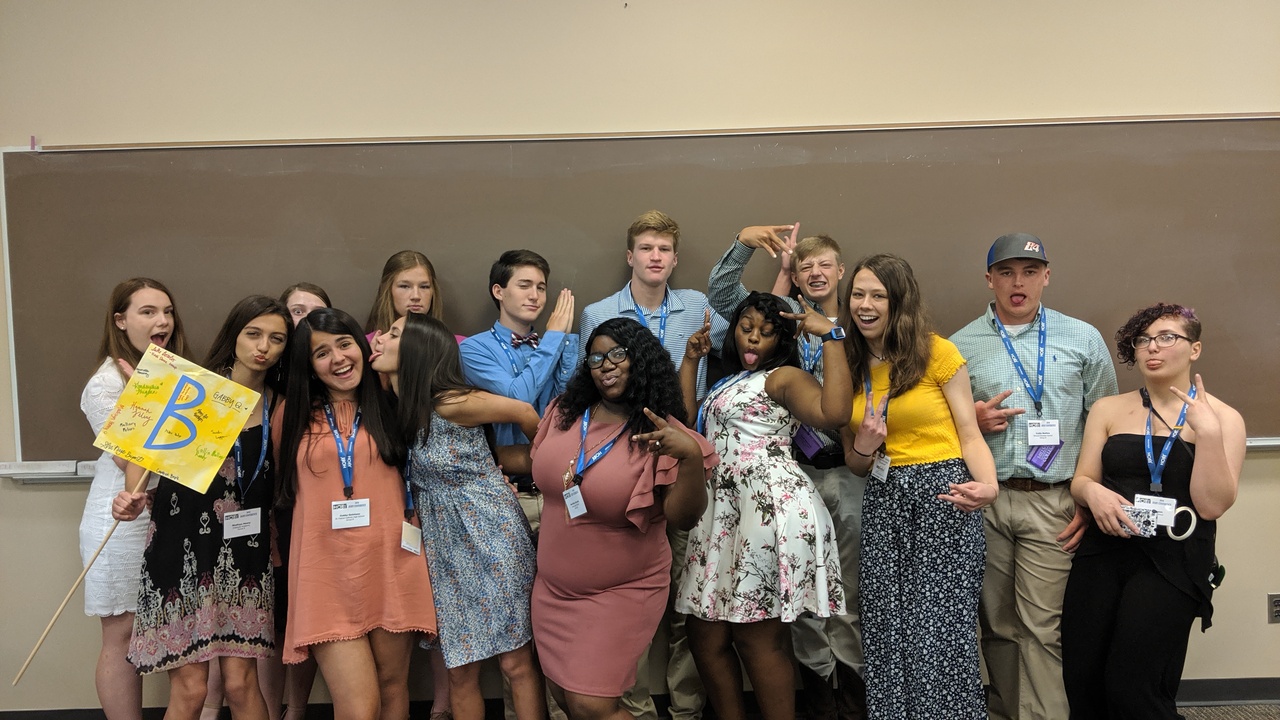 🐝 The annual HOBY group photo. Group B was the best, and I always feel more optimistic about the future and our youth after it. The kids are alright, and so will we be. 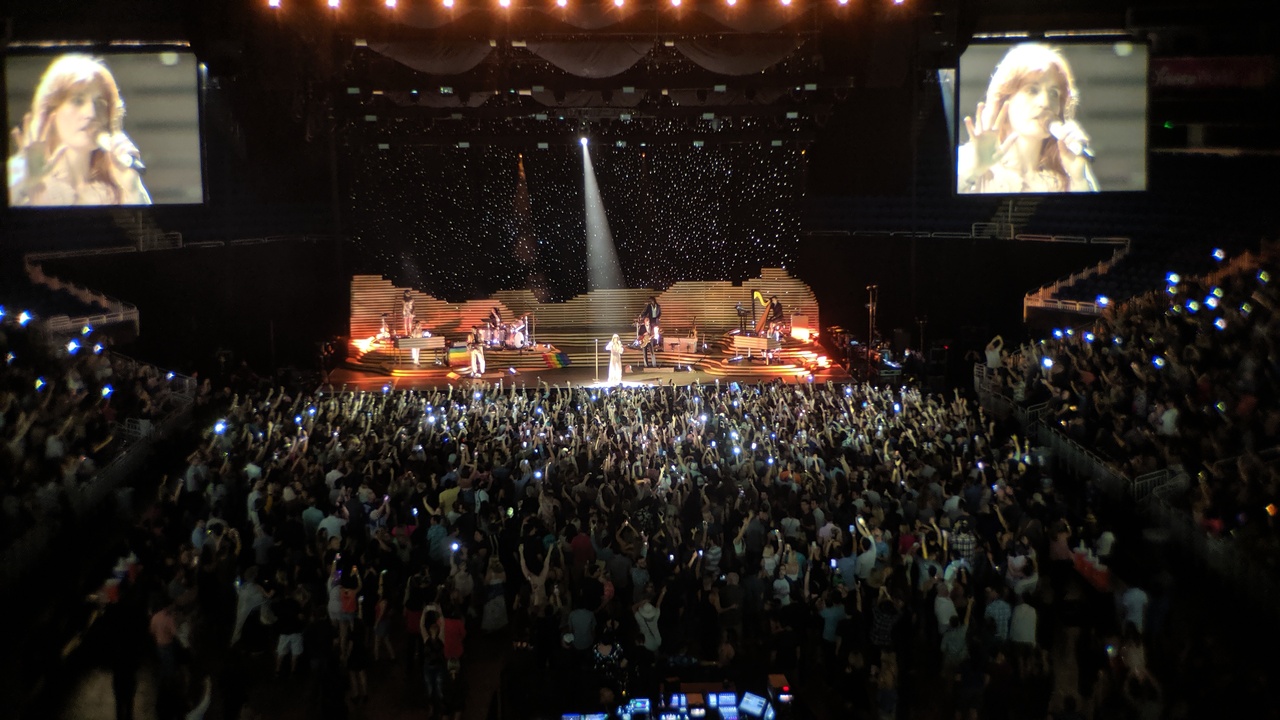 🎼 @florenceandthemachine. My mom was visiting, and because I had tickets I absolutely ditched her. Florence was a special thing that I wish I could experience again and again. I now understand those fans who follow bands on tour. Concert 2/2. 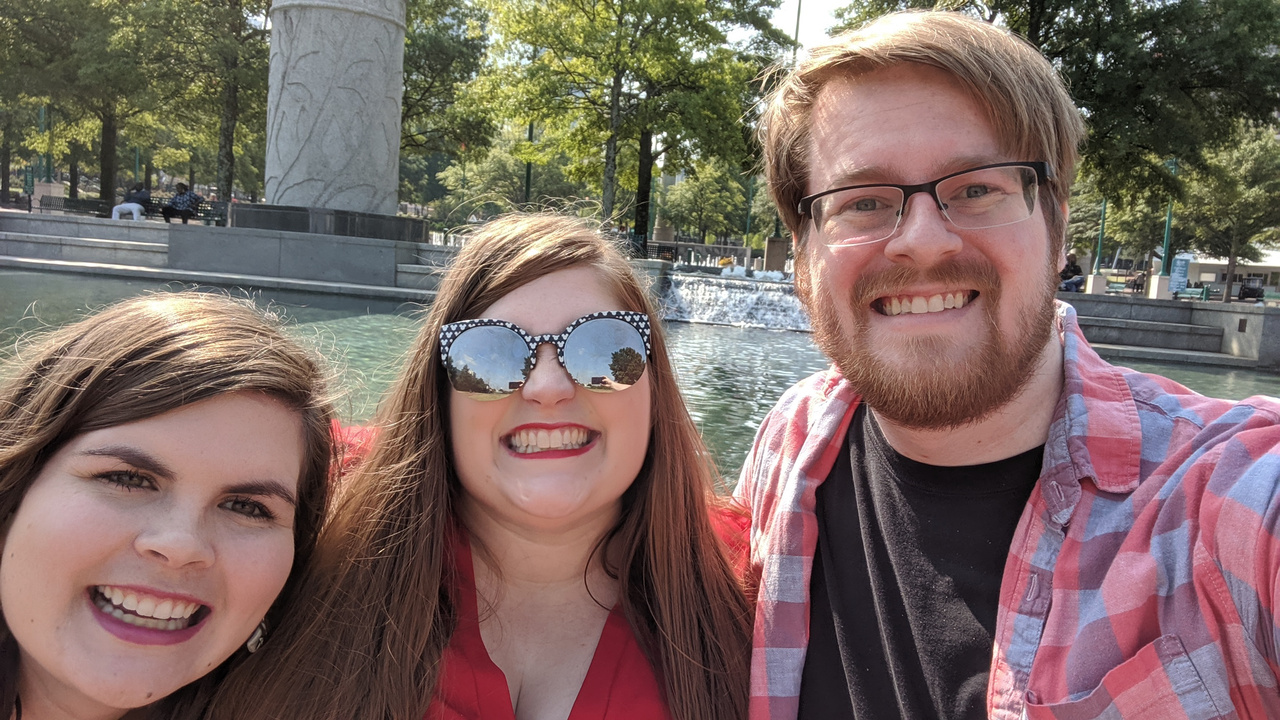 👰🏻 My best friend is getting married! With that comes bachelor(ette) parties, and we had a special one with @samrawiththecamera, @whitneykni, and myself. Between aquariums and bison restaurants and parks and Jackbox games, this was a great weekend. 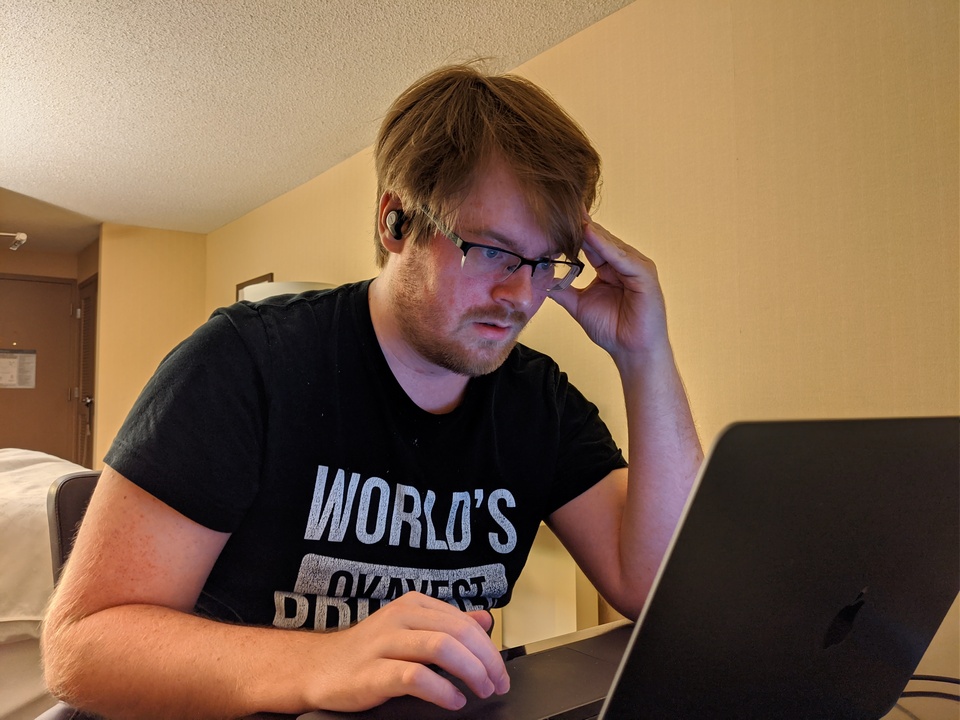 👔 Me, finalizing a work demo at 3:51am in Louisville, KY. Here I am working (and stressing) to get everything done. (Demo was a massive success, btw.) 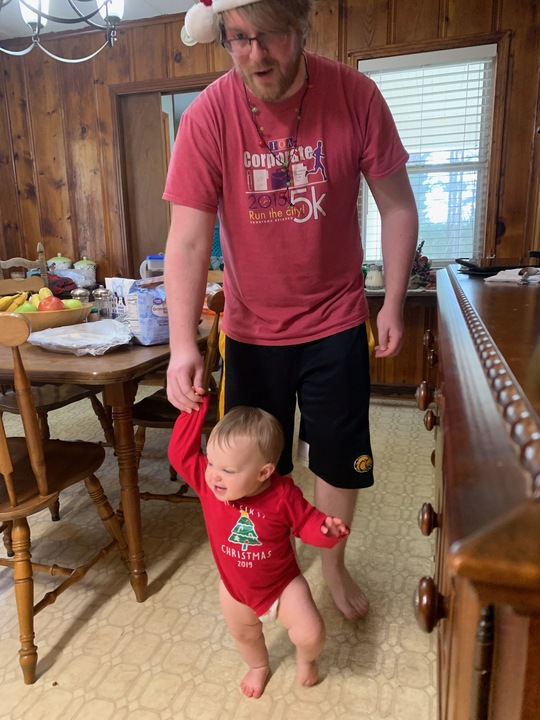 💡 The year is over, and you don't need to look any further than where Clara Mae is now: guiding people where she wants to go and having an unhealthy interest in hallway lights. CM, I can't wait to see everything that you do.

In 10 days we'll either have pickles or a disaster. Either way, it's gonna be a lot of fun!